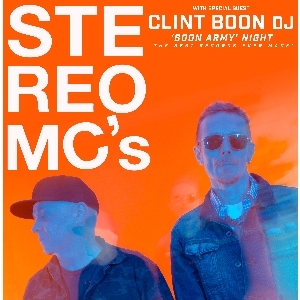 Please note the booking fee for this event includes a Venue Levy of £0.30 which is charged by the venue

This event is for 18 and over - No refunds will be issued for under 18s.

Still getting themselves connected to today's dance music scene, the Stereo MC's play the hits plus some fresh material, full of funky lo-fi beats and melodic raps.


Clint Boon, the former Inspiral Carpets frontman and Manchester legend now making an appearance behind the decks treating us to 'The Best Records Ever Made' BOON ARMY NIGHT !


Stereo Mc's formed in mid 80's, inspired by electronic music and early HipHop. They pressed up their first 12? vinyl and started an independent record label called G Street Records which released many UK hip hop artists and signed US acts such as Jungle Brothers . Shortly after they signed to Island/4th and Broadway records and released their first LP and and toured extensively as a live act , garnering a reputation on multi tours and festivals . Their 3rd LP connected released in 1992 became a world wide hit and the song connected became a classic tune.


Winding on some time, in 2015 tired of the major record label bubble ,and a love of dance music they decided to go back to their roots and embark on a new label project and the label connected was born, at first as a vehicle for themselves to release music also to release other artists music, encompassing Afro House ,Deep House and Techno and all variations of those genres. With distribution through Kompakt records in Cologne the label has grown extensively in the last few years and is now on its 40th release.


Apart from still touring as a live band , and with numerous releases (including collaborations with Adam Port ,Anja Schneider and Terranova amongst others) Rob Birch and Nick Hallam also continue with their love of DJ ?ing which is an essential part of the connected label, and special connected nights are a regular occurrence also featuring a variety of acts who release on the label , including David Mayer, Florian Busse, Nandu , Aaaron.


Clint Boon is the Inspiral Carpets' keyboard player/vocalist/songwriter who, since 2004 has become a permanent fixture on the airwaves of Manchester. He has worked as a radio presenter for several Manchester based radio stations, 96.2 The Revolution, XFM Manchester, Radio X, BBC Radio Manchester and XS Manchester. Believe it or not, 2020 marks Clint's 45th year as a DJ. He set up a mobile disco business in 1975 at the age of 15. He's pretty much DJ'd ever since. For the last 20 years, Clint has carved out a successful career as one of the UK's most sought after club DJs. His weekly Saturday night at Manchester's South Nightclub is now in its nineteenth year, the longest running weekly club night residency in the city. He also DJs around the UK and internationally. Since 1985, Clint's work with the Inspiral Carpets has taken him around the world several times and resulted in many hit singles and five highly acclaimed studio albums. The band are seen as one of the definitive ?Madchester' bands alongside Happy Mondays, James and The Stone Roses. Until recently, Inspiral Carpets were still very active on the live music scene having played recently not only in the UK but in Argentina, Spain, Greece and Italy.